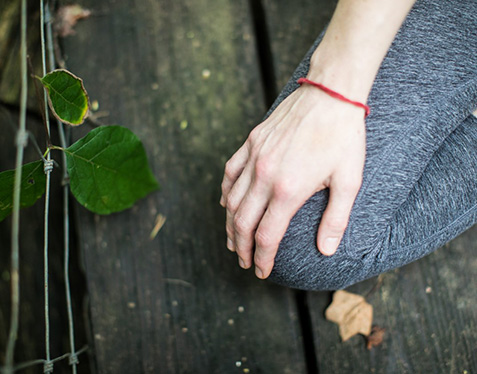 Mindfulness-Based Stress Reduction (MBSR) is an intensive 8-week course designed to empower participants through meditative awareness to take an active role in the management of their health and wellness. MBSR teaches the practice of mindfulness through meditation, yoga, and ultimately through awareness brought into our everyday lives. This course is modeled on the MBSR program pioneered by Jon Kabat-Zinn, Ph.D. and Saki Santorelli at the University of Massachusetts Medical Center.

“Mindfulness means paying attention in a particular way; on purpose, in the present moment, and non judgmentally.”Jon Kabat-Zinn

What is MBSR?
Mindfulness-Based Stress Reduction (MBSR) is an intensive 8-week course designed to empower participants through meditative awareness to take an active role in the management of their health and wellness. MBSR teaches the practice of mindfulness through meditation, yoga, and ultimately through awareness brought into our everyday lives. This course is modeled on the MBSR program pioneered by Jon Kabat-Zinn, Ph.D. and Saki Santorelli, Ph.D. at the University of Massachusetts Medical Center.

Who Will Benefit
Two decades of published research indicate that the majority of people who complete the 8-week program report greater ability to cope more effectively with both short- and long-term stressful situations. By learning to actively participate in the management of health and well being, many participants report they are better able to manage stress, fear, anger, anxiety and depression both at home and in the workplace. People taking the MBSR class come from all walks of life, but they share one thing in common: the desire to find more balance, peace and happiness in their lives.
What to Expect
The classes meet weekly for 2 – 2.5 hours each session, with an all-day Saturday session after the 6th week. Participants are asked to practice mindfulness meditation and/or mindful movement for 45-60 minutes a day. The 8-week course will include: Guided instruction in a variety of mindfulness meditation practices Gentle stretching and mindful movement Practices for integrating mindfulness into daily life Group dialogue and discussions aimed at enhancing awareness in everyday life Email and phone support Home practice materials (downloads/audio CDs and written handouts)
Specific benefits of MBSR (science and research papers)
FAQs about mindfulness and MBSR

Well there sure are many ways I’ve seen which attempt to encapsulate it and most typically refer to it as being some kind of present moment awareness, meaning that to them mindfulness is simply or at least partially describing a process of ‘being here now’. And whilst developing the skill of being ever present is undeniably part of what we call mindfulness, in reality it is only one aspect of the whole spectrum that this vast and highly transformative process points towards. So to effectively reduce it down to some kind of mind-ninja training whereby we rigidly anchor attention in the present moment is something of an oversimplification and those that do so tend to miss the true meaning and intent of this broad and beautiful practice.

The Oxford dictionary qualifies it as…

‘the intentional, accepting and non-judgemental focus of one’s attention on the emotions, thoughts and sensations occurring in the present moment’

Highlighting the equally important notions of intentionality, acceptance and non-judgement which all help to bring greater colour, depth & warmth to the seemingly, cold & unflinching stare of ‘now’ it would otherwise be.

It’s been pointed out by some highly eminent teachers that even our pets are quite clearly capable of keeping their attention firmly anchored in the present. Good old Fido isn’t usually troubled about yesterdays events or what might (or might not) be for supper tonight, but does that make him mindful? Unlikely. The above and other qualities such as curiosity, patience, wisdom, clear understanding and kindness also infuse the practice, adding a far deeper, richer dimensionality and allowing the possibility for it to become a vehicle for extraordinary and lasting personal transformation, permitting us to not just truly see and be with our moment by moment experience, but also to consciously frame the most helpful response to all of that experience as it arises and passes away. But to do so first you have to be able to see it and then know how to see it.

Fundamentally yes. But what constitutes meditation can be open to a very broad interpretation of what that might actually mean. In reality, all of our daily life experiences contain opportunities for meditation practice – to meet them skilfully with mindfulness. However at the outset mindfulness is undoubtedly taught as a formal meditation practice mostly by sitting and also walking whilst intentionally directing one’s attention to an instructed point of focus and then resting that focus within the framework of the aforementioned qualities of kindness, curiosity etc. Much emphasis is placed on the calm, quiet seated posture, and it is certainly fundamentally important to practice in this way regularly (preferably daily). But also in time we can begin to expand the same process outwards throughout all our everyday life, allowing the practice to reframe all of our experience in more helpful, healing and wholesome ways.

Also you are probably quite aware that there are an enormous variety of meditation styles out there these days, but in the context of mindfulness as it is referred to in the many Mindfulness Based programs (MBSR , MBCT etc) and also in the gargantuan amount of scientific research discussing its many benefits (the overwhelming proportion of which have used the MBSR program as the primary research tool) then what I teach and what is essentially taught in the above is a variety of meditation also called Insight meditation. This refers to a secular variety of techniques that have been inherited directly from Buddhist practice and as such they have been in continuous use for more than 2600 years. So you could say there’s been plenty of opportunity to iron out the bugs!

Finally even though it can (& hopefully will) become a whole life practice it must be taught as formal meditation practice. It can’t be acquired from a book, a movie, a TV series, workshop or lecture. Mindfulness is only learnt in the doing of it … in the practice. It is often referred to as a non-cognitive learning and so all our traditional educational techniques such as those above will never impart what is truly meant or intended.

As I mentioned previously, the techniques undeniably have their roots in Buddhist practice but are secular and taught simply as tools with which one may truly have a sense of the non-cognitive learning process we may call mindfulness. You will not become a Buddhist simply by learning mindfulness meditation.

Why would I do it?

We all understand the rambling nature of our own mind, ever dysfunctionally traipsing forward and backwards though time whilst fruitlessly attempting to alter some event that has already happened or predict one that is yet to occur. That simple process lies at the heart of much of the sense of overwhelm and exhaustion which characterises 21st century life for most us. That we humans have this marvelous thinking box on top of our shoulders is an undeniable bonus but the downside is that the ability to predict also allows us to attempt to predict what may go wrong as much as it does what may go well. Sadly for many of us, we tend to suffer an evolutionary quirk known as pessimism bias. In our less evolved incarnation, constantly looking out for danger was a useful evolutionary hedge against an early demise, but in this hectic, modern, always-on age it usually means we end up mindlessly stuck in an unconscious mental mire seeing only the downsides and reacting accordingly. And this defective default position once activated, underpins the unhelpful ruminative thinking patterns that these days we collectively tend to label as simply ‘life stress’. bringing with them the full gamut of health downsides we are all only too familiar with in this modern ever-on age.

Learning & practicing mindfulness meditation techniques is now known to have many enormous and varied health benefits.